50 years of carillon sounds ring out 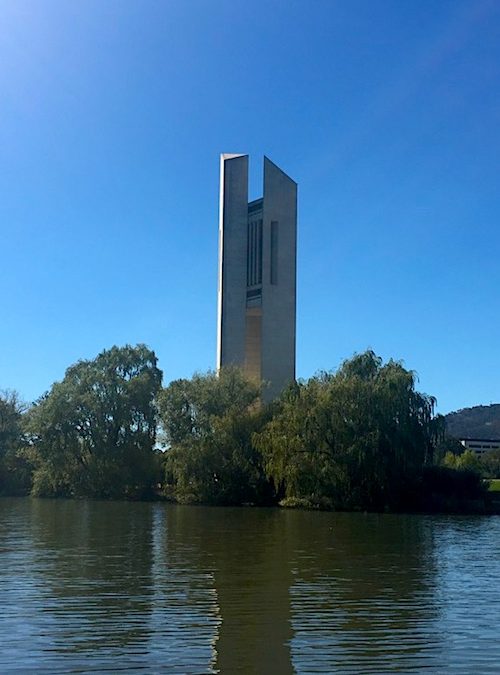 Fifty years ago today, on a cold and windy day, Queen Elizabeth II arrived by royal barge on Aspen island, to officially open the National Carillon and accept our much-loved music icon on behalf of the Australian people.

The design of the National Carillon was the winning entry of a design competition won by Ross Chisholm – from Cameron, Chisholm and Nicol, a firm from Western Australia, who also designed Belconnen Mall.

Like many constructions, there were issues along the way and timeliness was one of them with the clerk of works, Geoffery J. Toomer writing in his diary at the time about the lack of drive and sense of urgency on the project and the prospect of completing by mid-April becoming something very doubtful.

He then writes that the push was on, stating that by December of that year, three shifts were working on the site, from 4am to 7pm, with a shift continuing until after midnight on one occasion. (Details were recorded in his diary which was found in 2012 in a clean up the British embassy and given to National Capital Authority which has it in its archives.)

Sir John Overall, Commissioner of the National Capital Development Commission which was responsible for the Parliamentary Triangle and the National Estate, would jog around the lake and check the building’s progress – he was under the watchful of the British Embassy of course. No pressure!

Using an innovative building method at the time, no scaffolding was used. The carillon was built in a way that supported its own weight, using pre-cast formwork panels, which was like a a self climbing scaffold.

The National Carillon consist of three triangular shafts of different heights, that internally align to form the three sides of an equilateral triangle. The three columns are clad in glistening quartz and opal chip.

Before the bells were packed up and brought to Australia in time for the 1970 opening, a special ringing out ceremony was held at the foundry in Britain.

When placing the bells into the carillon, they had to be lifted through the middle of the triangle and then moved in through a special trapdoor to get to the bell chamber. The bells each weigh between 7 kg and 6 tonnes. This would have been quite an exercise!

The National Carillon has 57 fixed bells cast in bronze, played by striking a series of wooden batons and pedals laid out in a keyboard arrangement, but unlike a piano or organ, it is played by actually striking it with the palm of the hands.

The carillon is quite large by world standards and is one of only two manually played carillons in Australia, the other being at Sydney University. To be officially considered a carillon, the instrument must have a minimum of 23 bells. The pitch of the bells ranges through four and a half octaves. Each of the bells has five overtones, so makes five sounds at different levels of pitch.

The carillonists who play this instrument are highly skilled musicians, having studied in Australia and overseas. They can play virtually anything from rock and roll to specific carillon pieces.

Currently there are two new bells (taking the bell count to 57), new clappers and an upgraded keyboard being installed.

There will be no concerts during this work but there will be a series of special commemorative events when the National Carillon reopens later this year.

John Taylor & Co, the foundry in Britain that has made the new bells has been thrilled to be part of this project and actually had to recommission one its furnaces to make the large bell – which weighs 5 tonne.

We look forward to hearing the carillon’s music waft over the waters of Lake Burley Griffin again soon.

I find it a little humorous that this was a gift from Britain, and was accepted by the Queen on behalf of the Australian people – it is like giving with one hand and receiving with the other!