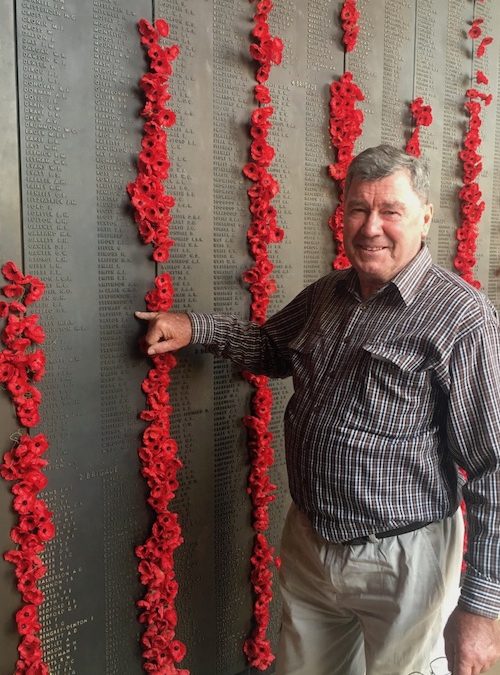 On Canberra Secrets Personalised Tours, we meet lovely people and everyone has a story to tell. This is Larry, who was travelling with his wife Lauren, and friends Neville and Marg. They had booked a Canberra Highlights Tours and so we visited the Australian War Memorial. During the course of the afternoon, Larry had been telling me a little of his family history, and how his great uncle was listed among the 102,000 names on the Australian Roll of Honour for paying the ultimate sacrifice while serving for Australia. More specifically, he was a gunner who died of wounds in Belgium 1917, and was listed among the 62,000 men and women who died during World War 1. So, we planned to find his name on the Roll of Honour during our visit.

When we arrived at the Roll of Honour, I told the group that the names are raised, so that family can run their fingers over the name, and connect with their loved ones. I randomly ran my finger over a name as I said this. As I looked up, I saw a look of incredulity on Larry’s face. The name I pointed to, was just one above Larry’s uncle – out of 62,000 names, I had homed right in to Larry’s great uncle. This took my breath away. Everyone had tears in their eyes – this was certainly a special moment for us all. But this also makes the story of service and sacrifice even more real, because these are loved family members. The loss of 62,000 Australians in World War 1 was huge for a newly federated country of about 5 million people – almost wiping out a generation of young men. Too sad. LEST WE FORGET