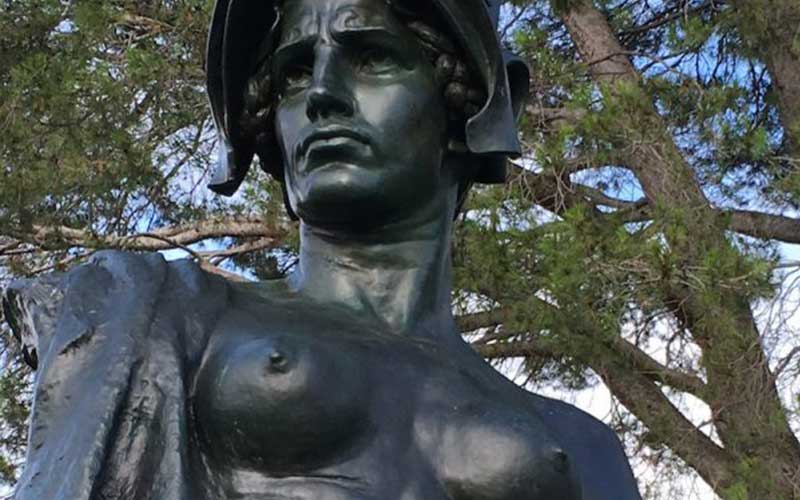 Canberra’s first public art installation, ‘War’ or better known as ‘Bellona’ pronounced as ‘Bellow-na’ has had an interesting history. Locally, she was called ‘Boadicea’, or ‘Bodie’.

Bellona is the ancient goddess of war and was created in 1906 by the Australian sculptor Sir Bertram Mackennal who was a student of the French artist Auguste Rodin.

Mackennal gifted Bellona to the Commonwealth Government in 1915 to honour the bravery and sacrifice of Australians during WW1.

She was officially unveiled in Melbourne on Anzac Day in 1921, standing in front of the then seat of Government. Placing her there was not a popular decision, many felt that she shouldn’t be near Parliament House and wanted her moved.

It was suggested that she be sent to the War Memorial in Canberra in readiness for when it was built. (The War Memorial was opened in 1941.) That wasn’t so popular with the memorial planners.

Regardless, she arrived in Canberra in 1926, minus her black marble pedestal which had been left behind. It had slipped from the two heavy wood bearers while being moved, and one of the sides of the pedestal was slightly chipped. It is not known why the pedestal was not sent to Canberra later, and was placed facing Commonwealth Avenue (on a locally-made concrete plinth), where she stood for many years.

See the National Archives image of Bellona  in the Canberra winter of 1929 here. Bellona would have seen many Anzac services, dances, community events and changes in the new capital.

She was often the brunt of practical jokers. Many times she was painted, dressed in bras, bikinis and other clothing. The locals loved her!

In 1954 just before the Queen’s visit to Canberra she was removed from the Albert Hall to the War Memorial. It was said at the time that undue attention to the sculpture by practical jokers might embarrass Her Majesty and that removal had nothing at all to do with the half nude figure. (The Queen would have been used to half-nude statues.) Newspapers reported that the removal ‘just happened to begin this week’. She was just moved to her rightful home, and work just happened to take place that particular week. It was a sheer coincidence.

She also lived for a time near the Administrative Building, Parkes, and in the grounds of Government House.

In 1977, Judith McKay, the War Memorial’s assistant curator, headed a campaign for her to be returned stating it was Mackennal’s intention for the bust to be a commemorative war monument. However the executive and finance committee stated that Bellona stood for the spirit of aggression, whereas the memorial stood for sacrifice, and rejected the idea. McKay stood her ground. Bellona was attracting media attention and if the memorial rejected this generous gift, then that might discourage future donors. The result was that Bellona was moved in 1981 to the War Memorial grounds.

As the memorial prepared its grounds for a sculpture garden Bellona was moved again, temporarily, in October 1993, to the Albert Hall, where she remained until August 1999, when she was moved to her final resting place, in the memorial’s sculpture garden, backing onto the Lone Pine tree and Limestone Avenue. Perhaps this work should have been built on wheels!