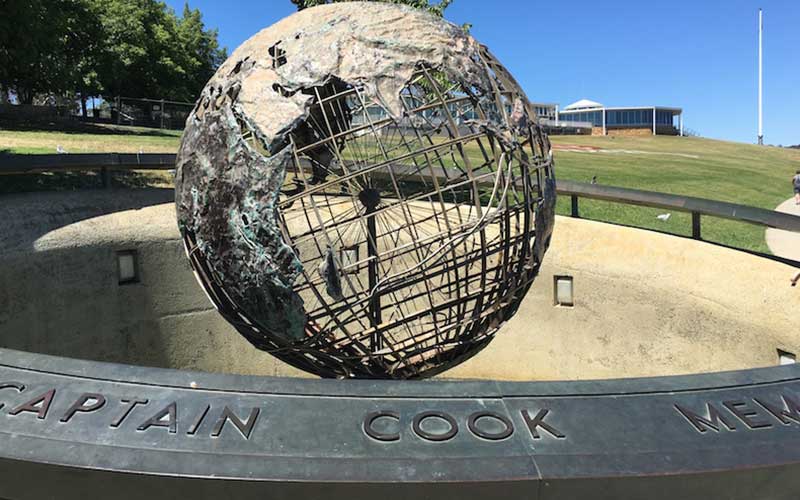 The Captain Cook Memorial Jet and Globe, located just down the hill from the National Capital Exhibition at Regatta Point commemorate the Bicentenary of Captain Cook’s discovery of the east coast of Australia. The jet, (currently out of action) is modelled on the similar one in Geneva, is set 150 metres from the lake edge and is a stunning asset to Lake Burley Griffin. Depending on wind conditions, water can be pumped to a height of 147 metres at 250 litres per second. In the winter the jet can look stunning – its spray carried on the breeze, against the snow-covered backdrop of the Brindabella ranges. The Captain Cook Memorial Jet operates daily 2pm-4pm.

The Globe is made of bronze, copper and enamel, and displays three routes taken by Captain James Cook in 1770 in the Royal Navy’s HM Barque ‘Endeavour’. Captain Cook discovered the east coast of Australia while travelling in the Pacific to observe the transit of Venus across the face of the sun, to assist with techniques of celestial navigation. He landed in Botany Bay in Sydney, and raised the Union Jack on 26 January 1770, claiming the land as part of the British Empire.

The exit velocity of water of the Captain Cook Memorial Jet is 260km per hour and the mass of water in the air at any time is 3 tonnes on single pump operation and 6 tonnes on dual pump operation. The jet can be remotely controlled by using programmable logic controls and also by using switchgear on site.

Just down the hill from the Globe is a small grove of cherry trees, which were a gift from the Japanese Government. With their beautiful pink blossoms these are simply delightful in the spring.

How about firing up the Captain Cook Memorial Jet for a special occasion — coloured light? Sound good? Contact the National Capital Authority on 6271 2888 to find out how.