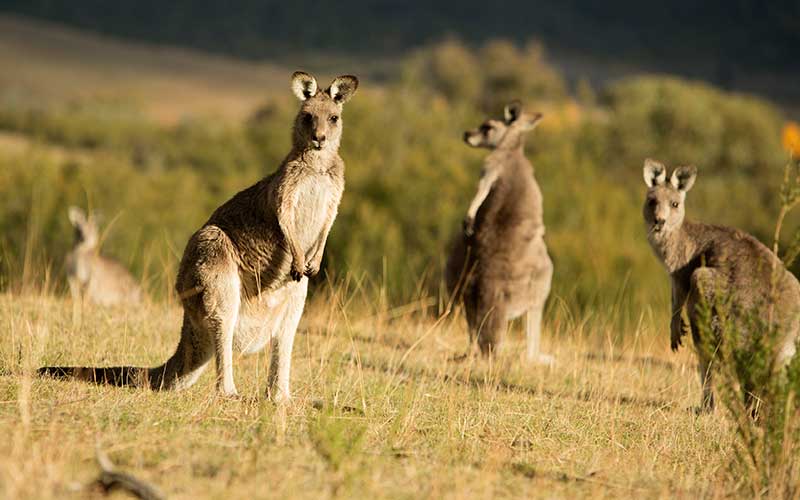 Kangaroos group together in what is called a mob. During the day they tend to stay in a shady spot and sleep while one kangaroo remains on guard to alert the others of any danger. Don’t try to look for pretty little animals with their ears up, they are harder to spot; look for dark ‘rock’ shapes because that is the shape of a kangaroo when it is feeding.

Always remember that kangaroos are wild animals and can be unpredictable. Their strong back legs can disembowel an animal or human extremely fast if they feel threatened or cornered. Always treat them with respect, walk calmly near kangaroos, and encourage children not to run wildly among them, as this will frighten them.

The eastern grey kangaroo is the most common kangaroo in Canberra and can be found in many of Canberra’s 33 Canberra Nature Parks. Canberra is also home to common wallaroos. The males are black, and the females are a pale grey. There is also the red necked wallaby, or the swamp wallaby, which funnily enough have nothing to do with swamps.

Kangaroos can often be easily seen from the road, but you may also have to walk short distances to see them. The best time to see kangaroos is early morning and late afternoon. They are also easier to spot on dull days.

Take care — kangaroos cross roads!
The chance of seeing kangaroos on roadsides during peak traffic periods is greater in winter and spring, after a long dry period, when driving through bushland and rural areas, and either side of a full moon.

Where to spot kangaroos in Canberra

Campbell: A very good location for spotting kangaroos and birds is near Campbell Park Offices at the end of Northcott Drive. There is plenty of car parking on the eastern side of Campbell Park offices. Birds are plentiful in this area, particularly kookaburras, parrots, and noisy friarbirds.

Mount Majura: At the base of Mount Majura near the horse paddocks in Watson there is often a mob of kangaroos.

Yarralumla: The area around Royal Canberra Golf Course in Yarralumla contains a large population of kangaroos. There is also a mob of kangaroos which can often be seen within the fence line of Government House along Lady Denman Drive, Yarralumla. A good idea is to park near the Government House Lookout and see if the mob is resting beneath the trees. Then, do two things at once – go and have a look at Government House from the lookout. You possibly will see more kangaroos from this point as well as seeing the residence of the Governor General.

Mugga Lane: Travelling along Mugga Lane, Hume, and Long Gully Road, Isaacs, will take you past Wanniassa Hills, which is part of Canberra Nature Park. Here you can find a great number of kangaroos.

Weston Park: A great place for a family picnic, but also to spot kangaroos. Kangaroos are pretty used to onlookers here so you can get up fairly close. You will often see several females with their young at foot here.