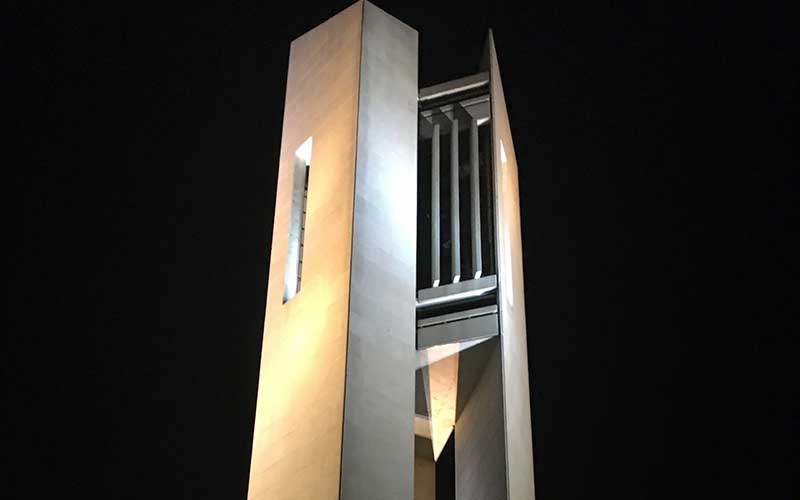 Standing 50 metres above Aspen Island in Kings Park is the National Carillon.

The National Carillon was a gift from the British Government to celebrate Canberra’s 50th birthday. The word carillon comes from the old French quarregnon, and means ‘bells on four towers,’ towers being the four corners on a castle.

The carillon has 53 fixed bells cast in bronze, which are played by striking a series of wooden batons and pedals (clavier) which are laid out in a keyboard arrangement. The pitch of the bells ranges chromatically through four and one half octaves. The bells each weigh between seven kilograms and six tonnes and were cast in England.

By world standards this carillon is quite large and is one of only two manually played carillons in Australia, the other being at Sydney University. To be officially considered a carillon, the instrument must have a minimum of 23 bells. Each of the bells has five overtones, so makes five sounds at different levels of pitch.

The carillonists can play virtually anything from rock and roll to specific carillon pieces. They perform traditional music for special days, which include festivals, Australia Day, Anzac Day, and Valentine’s Day. See the National Capital website for performance details.

When the carillon was built, no scaffolding was used. It was built in a way that supported its own weight. The carillon consists of three angular columns clad in glistening quartz and opal chip.

Canberra boasts local composers who have gained international recognition and who have written a number of compositions especially for this carillon. ‘Pea’ by Larry Sitski written for his son’s wedding, ‘For the Death of a Century’, written by Christopher Lyndon-Gee to celebrate the millennium changeover, and ‘Lake Music’, by Terry Vaughan to celebrate the opening of the Carillon in 1970 are just a few.