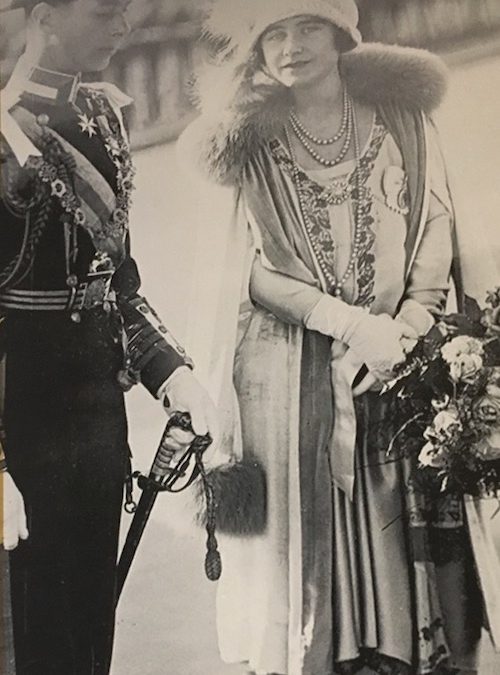 Today, 9 May, is an auspicious date for grand openings in our Parliamentary history:

Here are a few quirky snippets and secrets about the opening of the Provisional Parliament House, Canberra in 1927

A fanfare of bugles by eight Royal Marines greeted the Duke and Duchess of York (later to become King George VI and Queen Elizabeth) and a 21-gun salute sounded as they walked up the steps of the newly-completed building.

The Duke of York was handed a 14-carat gold key to open the glass-panelled doors as part of the ceremonial opening of the Provisional Parliament House. The key was designed by Edwin Henderson, the same architect who also designed Manuka Pool and Ainslie Primary School. Usually in these sorts of ceremonies, the original key would be given to the Duke to keep, but he was given a replica, with the original kept for years in a brown velvet box in a cupboard in the National Library before finally being placed in perpetuity in the office of the Speaker of the House in the permanent Parliament House.

Technology was quite sophisticated at the time, with the opening of the Provisional Parliament House broadcast to radio stations in Queensland, NSW, Victoria and SA, reaching over one million people.

But several things did not go according to plan:

Canberra’s isolation was problematic and access to services was limited. The real invitations to guests for the ceremony had not been received, because they didn’t get printed, and many important people of the time, such as Alfred Deakin, (Australia’s second, fifth and seventh Prime Minister) and King O’Malley, (former Minister of Home Affairs and advocate for the design and establishment of the Federal Capital) missed out on an invitation altogether.

Opera singer Dame Nellie Melba sang the national Anthem and the Air Force fly past drowned her out while singing the second verse. She had refused to use a microphone.

There was a shortage of accommodation, so many visitors camped in tents. Some Parliamentary staff even slept in their offices!

A sobering event during the proceedings was the plane crash nearby, of Flying Officer Francis Charles Ewen, a former RMC Duntroon student, who was piloting a one-man plane, a Scout Experimenter. The 28 year-old was later buried in the graveyard at St John’s Church in Reid. His grave can be found today, just to the left of the entry of the church.

Prohibition existed between 1918 and 1928, so no alcohol could be served at the opening.

A crowd of around 1,000 attended, which was much smaller than expected. This resulted in more than 10,000 Sargents meat pies and sausage rolls, along with prawns and fish disposed of – buried either at Queanbeyan tip or the site of where the Treasury Building stands today.

Jimmy Clements, also known as ‘King Billy’, was an Aboriginal elder from the Wiradjuri tribe near Gundagai. He and another Wiradjuri man, John Noble, walked for three days, to be at the opening of the Provisional Parliament House to demonstrate his ‘sovereign rights to the Federal Territory’. Told to move on by police, Clements was supported by the crowd who expressed the sentiment that an Aborigine had every right to be there, and so King Billy was presented to the Duke and Duchess of York.

The formal lunch included turtle soup and hot chips and Dame Nellie Melba was noted for picking pieces of food off the plate of the person next to her — Captain Batterbee, Political Secretary to His Royal Highness — who couldn’t manage to eat anything because the collar of his uniform was too tight.  Aeroplane Jelly was first produced in 1927 and it is understood that Captain Batterbee only managed to eat some of this at the lunch!

And finally, Canberra Pudding was also on the menu. According to Australian Food Timeline, in 2007 the ABC published a recipe for Canberra Pudding contributed by listener, Lorna Fazldean, who’s grandmother used to make it. So here is the recipe. (Go and find your dripping!)

Mix together a cup and a half of flour and the teaspoon of baking power.
Rub in 2 tablespoons of dripping and a pinch of salt.
Add half a cup of currants and enough water or milk to make a soft dough.
Roll out the dough on a floured board in a rectangular shape.
Spread a layer of jam over the dough.
Sprinkle a handful of sultanas over the dough/jam.
Roll up the dough and place it in a baking dish.
Mix a cup and a half of water with three quarters of a cup of brown sugar and then pour over the rolled up dough.
Bake in a moderate oven until brown.