Magna Carta a gem on the Hill 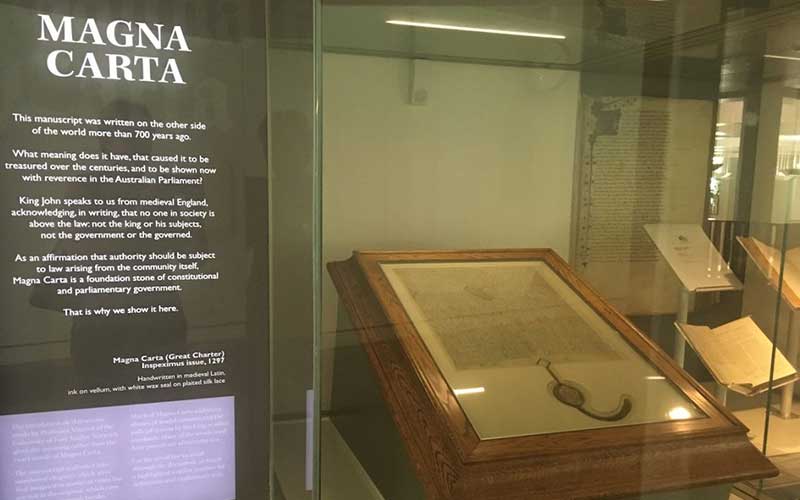 The Magna Carta, Latin for Great Charter, is one of the most famous documents in the world. It was drawn up in June 1215 as a peace treaty between England’s King John and his rebellious barons

The principle of the Magna Carta is that everyone was subject to the rule of law, even the king himself. It is considered the cornerstone of democracy – even though it has been rewritten, with changes, many times, and only three clauses remain part of English law.

On 15 June 1215, the Magna Carta was first agreed upon by the King and his rebellious barons. The document was written in ink, in Latin, on vellum, by a scribe known as Hugh of Yarmouth.

Copies of the charter were sent to all officers, cities and cathedral churches throughout the realm. The copy we see in Parliament House was sent to the Sherriff of Surrey, Robert de Glamorgan, to be read out in the county court.

The Sherriff then passed the document to the nuns of Eastbourne Priory in Sussex for safe keeping, where they likely remained until the 1530’s.

It is thought that a substantial number of deeds including the 1297 Magna Carta were then passed into the possession of a family who employed a solicitor by the name of John Louch, based in Drayton, Somerset during the late 1800s.

The solicitor stored all the documents in his strongroom deedboxes and at some stage before his death in 1905, may have been accidently transferred from the deedboxes in Mr Louch’s office to the King’s School in Somerset, just 20 miles from the solicitor’s office.

It wasn’t until the late 1930s that the 1297 Magna Carta was discovered at the King’s school in Someset — allegedly in school desk!

In early 1951 the principal of the impoverished school took the document to the British museum in London to be examined by experts. The museum recognised it as a 1297 copy of the Magna Carta and offered £2,500 for it.

There was much argy bargy that went on about the sale of the Magna Carta and whether it could be exported. The British Museum was very keen to keep it. There was also concern at the time that it would end up being sold to the US.

Meanwhile Australia’s National Librarian Harold White, was working to make sure that it would end up in Australia. He persuaded the then Prime Minister Robert Menzies to approve the purchase.

This 1297 inspeximus Magna Carta was bought for 12,500 pounds sterling (with money from the Prime Minister’s Department rather than the National Library budget) and brought it to Canberra, where it is in the custody of the Australian Parliament.

The document was transported to Australia by ship, arriving 28 November 1952. It underwent conservation and was eventually sealed by CSIRO in an air-tight glass and metal container, before being displayed in Kings Hall at Old Parliament House in 1961.

The Magna Carta moved to the new Parliament House in 1988 where is sits in a special display case, alongside interpretive signage. You can see this important document when you visit.

Only two other copies pf the Magna Carta exist outside England; the other sold in 2007 for over $21 million at auction in the United States. Other 1297 Magna Carta manuscripts are held in the British National Archives in London and in the Guild Hall of the City of London.