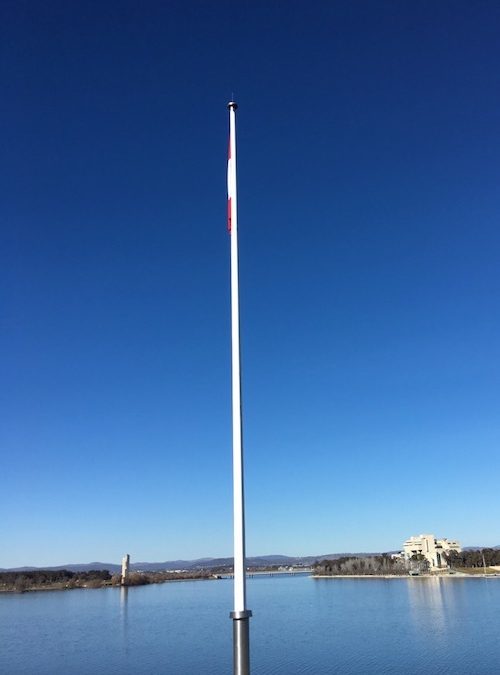 Today was a big day, with the felling of the Canadian Flagpole which has graced Regatta Point and the shores of Lake Burley Griffin for more than 50 years. Sadly, the flagplole’s condition had deteriorated so much that it had to be removed. I had noticed for some time that it was in need of some love and care. The flagpole represents the bond of friendship, and diplomatic and trade ties between Australia and Canada. Not only that, it was an integral part of the Canberra visita – even pilots would use it as a landmark when coming in to land.

The Canadian Flagpole has a delightful history. It is a 39 metre (150 foot) single spar of Douglas Fir and weighs 7.1 tonnes.

It was a gift from the Canadian Government in 1957 and was offered to Australia as a memento of the visit of the Canadian Deputy Prime Minister in 1955. It had also been offered to the Australian government during the 1930s but was declined because at that time there was no way to transport it from Sydney.

The timber, upon arrival in Sydney, underwent a fascinating preparation time before being erected on the Regatta Point site. For ‘quarantine reasons’ it was submerged in Sydney Harbour for a number of days, then transported to Canberra on three railway trucks. When it arrived in Canberra it was kept damp and treated with chemicals in a specially-made bath for three weeks to help protect the timber from the elements it would experience in the future.

Because of the pole’s length, a crane had to follow the truck and four-wheeled-trolley upon which it was transported en route to Regatta Point. This was to lift the trolley back on to the road each time it veered off. It must have been a very peculiar sight!