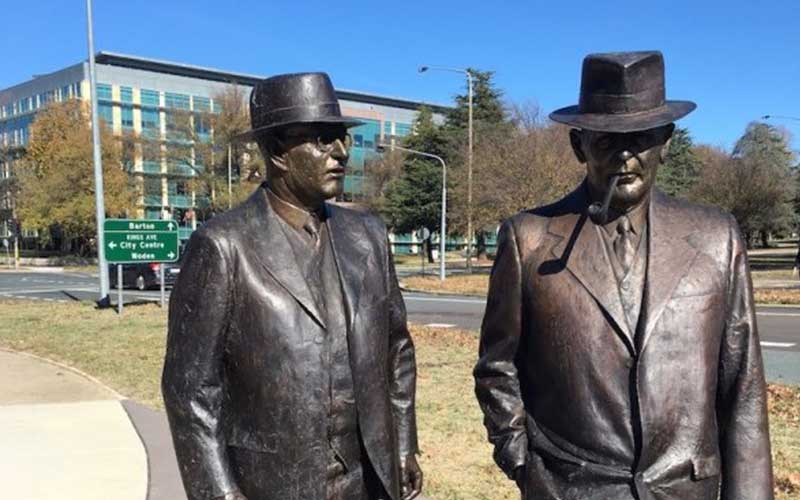 Peter Corlette is an outstandingly fabulous sculptor. He has created some amazing pieces in Canberra including the larger-than-life sculpture of former Prime Minister John Curtin and his treasurer, Ben Chifley (later to also become Prime Minister). The men are walking, while deep in conversation, and are located just off Kings Avenue Parkes, not far from the National Archives. I love this work. In fact this would be my favourite piece of public art in Canberra. Based on a photo taken in 1945 as the pair walked from the Kurrajong Hotel back to (Old) Parliament House after lunch, Corlette created a work that shows a synergy between the two men – Curtin seemingly having just spoken and Chifley being pensive, perhaps considering a carefully crafted response.

Peter Corlette worked to create a sculpture of authentic, full-size figures in bronze, based exactly on the photo. But that’s a big call – changes were needed to make it work – a photo sees one dimension where a sculpture is a 360 degree view.

He researched the two men and how they worked as they walked together. They were striding along, a mirror image of each other. Colette videoed people walking and how the process of people walking works, and also how legs work in trousers when they walk.

What Corlette has produced are realistic, authentic, warm, engaging sculpture that makes one do a double take to check if these men are real.

Where the sculptures are located, is where the men actually walked – and is the actual location of where that photo was taken in 1945.